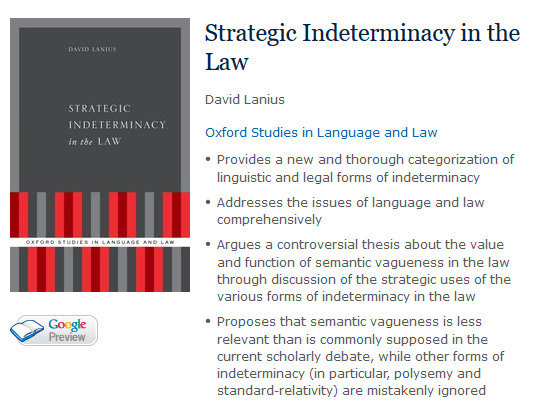 My book on “Strategic Indeterminacy in the Law” has been published in 2019. It is available on amazon.de, bücher.de and global.oup.com. A short overview in German can be found on the blog of the Forum für Streitkultur. Rewiews have been or are to be published with Zeitschrift für philosophische Forschung as well as the Journal of Applied Philosophy.

Description of the Book

Though indeterminacy in legal texts is pervasive, there is a widespread misunderstanding about what indeterminacy is, particularly as it pertains to law. Legal texts present unique challenges insofar as they address a heterogeneous audience, are applied in a variety of unforeseeable circumstances and must, at the same time, lay down clear and unambiguous standards. Sometimes they fail to do so, however, either by accident or by intention. While many have claimed that indeterminacy facilitates flexibility and can be strategically used, few have recognized that there are more forms of indeterminacy than vagueness and ambiguity. A comprehensive account of legal indeterminacy is thus called for.